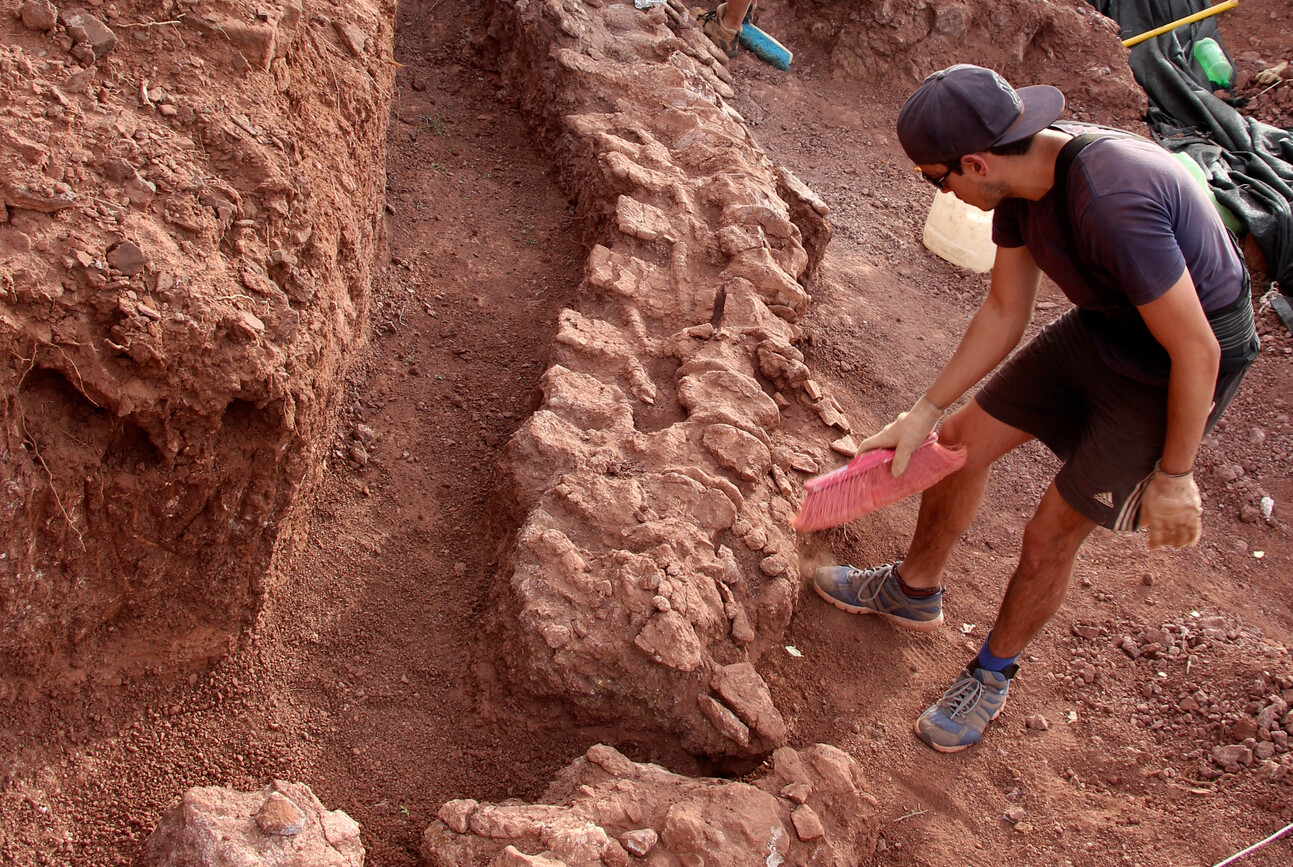 “This is a caudal vertebra of the tail of this new dinosaur, it weighs between 20 and 25 kg. ” Dissector in hand, like the one used by dentists, geologist Alberto Garrido begins meticulous work in his laboratory at the Juan A. Olsacher Provincial Museum of Natural Sciences in Zapala, 1,300 kilometers southwest of Buenos Aires in the Argentine province of Neuquén.

→ MAINTENANCE. “There are still many dinosaur fossils to be discovered”

The first elements analyzed from this 98 million-year-old giant titanosaur, from the sauropod branch, suggest that it would be the largest ever found in the world, according to a study published on January 20, 2021 by the journal scientist Cretaceous Research From the Netherlands.

What has been discovered so far are elements of the pelvic girdle, the pectoral girdle and the first 24 vertebrae of the tail, that is, the least heavy. “While the weight of each dorsal vertebra would be of the order of 300 kg”, specifies Alberto Garrido, 49, who has directed the Olsacher Museum since 2008, and who has participated in numerous excavations in this region of southern Argentina so prolific in fossil remains.

The camp 50 minutes walk from the deposit

“This new dinosaur does not yet have a name, its discovery is part of a scientific research project developed by our long-standing museum. What distinguishes it from the others, besides its large size, is that it dates from the Lower Cretaceous, a period to which only 5% of the specimens found in the region correspond ”, he explains while remaining evasive on the precise location of the excavation site. “We had bad experiences in the past”, he justifies.

In 2013, a short distance from the discovery of another dinosaur, three vertebrae emerged from the sediment. “Just seeing them, we understood that it was indeed a sauropod, and a big one. By clearing on one side and the other we could see that the vertebrae were articulated; it had a lot of potential ”, remembers the geologist. But before moving forward, the other dig had to be concluded. To preserve them, the first bones were covered until 2015, when a team of five paleontologists and Alberto Garrido as sole geologist returned to the field.

Reproduction of Puertasaurus, a titanosaur of 80 to 110 tons and 40 meters long, whose fossils were found in South America. / Raul Lunia / Leemage via AFP

With a pickaxe and a pneumatic hammer, a well-formed tail began to emerge from the rock, and then the hip was exposed. “This dinosaur is supposed to be pretty much complete because everything we worked on is in perfect condition, tells the geologist. But the work is arduous, we have to do it the old-fashioned way: pickaxe, iron cutter, crowbar … Our camp is a 50-minute walk from the deposit, forcing us to transport generators and other heavy equipment on the back of men. . “

A third of the animal could be unearthed and the less heavy vertebrae made their way from the laboratory to the Olsacher Museum for the meticulous work of cleaning and preparation. And then the pandemic upset all plans …

Larger than the Patagotitan mayorum

Without being able to work on site due to the strict social isolation measures imposed by the Argentine government in March 2020 to curb the spread of covid-19, the scientists began to write a report.

The first observation is that this dinosaur would have weighed between 70 and 80 tons alive and would be 10 percent larger than another discovered in 2017, the Patagotitan mayorum, which measured between 35 and 38 meters. “These are estimated calculations. It is clear that it is bigger than the Patagotitan. If it is almost complete, as everything indicates, we can take more realistic measurements and also adjust those of the rest of the dinosaurs that are in the vicinity. There is still a lot to learn ”, specifies Alberto Garrido.

→ READ We better know the last moments of the dinosaurs

Alberto was only about ten years old in Plaza Huincul, province of Neuquén, 1,260 kilometers southwest of Buenos Aires, where he was born, when he went to search the fields to collect arrowheads from inhabitants from the region: Mapuches, Araucanos, Gününa-kena.

“I started with the archaeological side, but very quickly I drifted towards paleontology and geology, he remembers. Next to the arrowheads there were dinosaur remains and these bones fascinated me, I wanted to know why this animal had died there. For me the bone is just one more piece in the context. ” He has since made his way and been summoned to participate in excavations in Canada, the United States, China and Hungary, to name but a few.

Neuquén’s subsoil is full of oil and gas. This sedimentary basin formed in the Upper Triassic around 220 million years ago constitutes the main fossil fuel reserve of the South American cone. Before the formation of the Andes Cordillera, the region was regularly bathed by the waters of the Pacific, hence the presence of marine deposits in the middle of the continent.

Over the eras, present-day Patagonia has sheltered deserts, deep seas, jungles and then again immense deserts. In the Triassic, a tearing of the continental crust was to be the starting point for the development of the Neuquén basin. It was the beginning of the breakup of Gondwana, when South America split from Africa producing phenomenal tears in the continental crust. It was not until the beginning of the Jurassic that a huge depression gave birth to the current Neuquén basin; then, at the time of the extinction of the dinosaurs, the region experienced a new marine invasion, this time from the east: the Atlantic Ocean.

In this chaotic and changing setting, the region was inhabited 220 million years ago by different species of dinosaurs, including titanosaurs like the recently discovered, herbivorous, long-necked quadruped. “With some exceptions, this is a dinosaur that had neither spikes nor breastplate to protect itself from carnivorous predators; their only defense was their imposing size, reminds Alberto Garrido. The mortality rate was undoubtedly very high, in their youth they were very easy prey. Their survival strategy was to grow quickly and in large quantities. We understand it just by seeing the huge deposits like the one discovered in the region of the Auca Mahuida volcano in 2017, which contains thousands of dinosaur eggs containing embryos, 70 million years old, spread over several levels and for miles. All the information we were able to collect tells us that these sauropods moved in herds, that they were in constant motion, devoting a large part of the time to feeding to maintain their colossal body mass, and no doubt they had specific places of spawning. “

The craze for paleontology

Argentina is no exception when it comes to the quantity of deposits. Many are found in the United States and Canada, China, as well as Brazil, and smaller ones in Europe. For Alberto Garrido, “The difference is that here generally we find new species; our geology is very rich both for the immense extent of Patagonia and for other basins sedimentary resulting from the formation of the Andes Cordillera: San Juan and La Rioja in the Center-West, Salta in the North, and these ancient deposits are found today on the surface of the earth where fossils outcrop. “

Argentina was one of the pioneer countries in paleontology in Latin America, influenced by German scientists who formed the basis of local geology in the late 1870s. But, when it comes to dinosaurs, “We are a hundred years behind Europe and North America, recognizes Alberto Garrido. It was not until the 1960s that a paleontologist from our country, Jose Bonaparte, embarked on their study and then trained the first specialists. “ Moreover, one species – the Zapalasaurus Bonapartei – bears his name.

Local paleontology has grown exponentially in recent decades. A rare discipline for a long time, it aroused interest and vocations thanks to the Jurassic Park saga. “After the release of the first film, young people began to enroll in universities to follow the career of paleontologist. And today we have a mass not only of students but already of professionals who will certainly contribute to the development of the discipline ”, projects Alberto Garrido optimistically.

→ EXHIBITION. “Archeology at high speed”, when the LGV reveals history

And to conclude: “You have to walk a lot to find dinosaurs, the expanses are so vast, there is so much to search. Along the way, we are often surprised by what we find, and this generates strong discussions. This is one of the principles of science. “

► Dinosaurs, or giant reptiles, were thus named by the British paleontologist Richard Owen in 1842, from the Greek terms deinos “terribly large” and sauros “lizard”. They are not actually reptiles, and many species are small, sometimes no bigger than a chicken.

►They lived about 160 million years ago. Their longevity during the Mesozoic, Triassic to Cretaceous, between 225 and 66 million years was a sign of their great adaptability.

► 1,200 species have been identified thanks to the discovery of fossils: sauropods, quadrupedal herbivores, theropods, bipedal carnivores, giant or small, with teeth or a beak, covered with feathers or scales, etc.

► They haven’t completely disappeared. Birds are considered to be the descendants of a group of theropods.

► France, too, land of dinosaurs. Nearly 1,000 sites have been discovered in France and cover 150 million years. One of the largest sauropods in the world, over 35 m long, was exhumed in a quarry in Angeac in Charente.