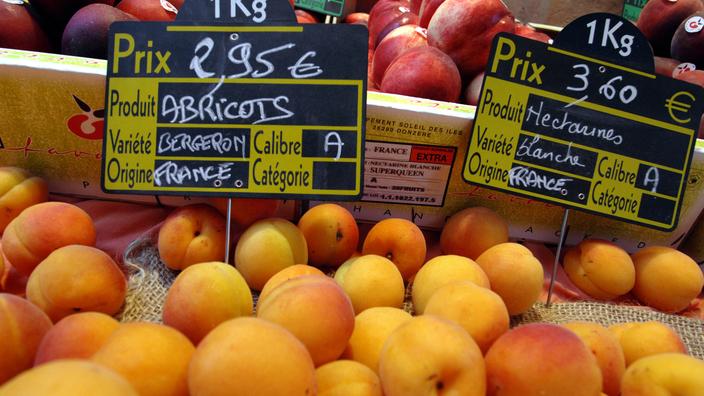 As a result of the frost wave at the beginning of April, the professional sectors are witnessing large volume losses in French fruit production. The vegetables are rather spared.

Summer fruits produced in France will become rarer, which is sure to have repercussions on their prices. A direct consequence of the “biggest agronomic disaster of the 21st century“, In the words of Julien Denormandie, the Minister of Agriculture. “The most affected are cherries and apricots because the frost affected them at the small fruit stage. Then come plums, nectarines and peaches, affected to a lesser extent», Explains Stéphanie Prat, director of the National Federation of Fruit Producers, an organization attached to the FNSEA, the first French agricultural union.

To see also – After the frost, the rise in the price of fruits and vegetables?

Between 60 and 70% loss for apricots and cherries

“Across the country, we should have production losses of between 60 and 70% for apricots.», Details Raphaël Martinez, who heads the national sector of Les Pêches et Abricots de France. The proportion is similar for cherries. On the other hand, peaches in particular are more resistant to frost, which, according to current estimates, has made it possible to contain losses around 30% at the national level. On the vegetable side, if the current weather does not favor the growth and consumption of asparagus, the frost has nothing to do with it. “The vegetable production cycle is much shorter. The impact of frost is especially on fruit»Explains Jérôme Desmettre, president of the union of wholesalers of the Rungis market.

So, for consumers attached to eating French, it may be necessary to bet on the dish and skip the dessert. Especially since the frost, which has affected all of Europe, will have an impact on production beyond borders, which should drive up prices. “We know that with losses the prices will be high, even if it is impossible to give their exact amount which will depend on supply and demand. There will be variations. We can see it now with the prices that apply to Spanish products arriving on the market and which are expensive.», Analyzes Raphaël Martinez. “It is impossible to quantify the increase because there are many intermediaries, corroborates Stéphanie Prat. We only hope that the distribution will not apply too large margins so that the price increase is not too important for the consumer.“

For the products that will land on the stalls, however, do not worry about the taste. “The frost burns the flowers but what makes the quality of the fruit is the sun», Sends Jérôme Desmettre. But, if the products meet strict regulations, their visual appearance could be a bit messed up. “When the stone has been affected by frost, it affects the growth and appearance of the fruit, explains Raphaël Martinez. There is a risk, for example, of having a lot of split cores. “

Read also :How the health crisis reconciled the French with their farmers

News that does not plead for food sovereignty

In any case, there will be no shortage on the stalls, thanks to an increased use of imports. The news should not delight French decision-makers, while the President of the Republic Emmanuel Macron attended a conference this week on the country’s food sovereignty. France already imports 60% of its fruit and 40% of its vegetables in normal times, as Christiane Lambert, president of the FNSEA, reminded the JDD prior to this conference.

“For thirty years, the production of fruits and vegetables has been decreasing in France while it is increasing in Spain, notes Jérôme Desmettre. Suddenly, when we have frost in France, the consequence is more for the producer than for the consumer.“Especially since if Spain has also suffered from the frost, although less than France, the country is overproducing. “We will work with French producers who will have production. And for the rest we will look in particular to Spain», Continues the wholesaler.

“We call for solidarity so that the French products present do not remain on the floor, says Stéphanie Prat. These additional imports must remain one-off, because losing a market goes quickly, and regaining it always takes longer. It is important for this that consumers are actors.“”Rungis will look where we produce, to bring where we consume, however loose Jerome Desmettre. Including whether to go far!“

To see also – Jean Castex announces an “exceptional solidarity fund to the tune of one billion euros”, for farmers hit by the frost episode