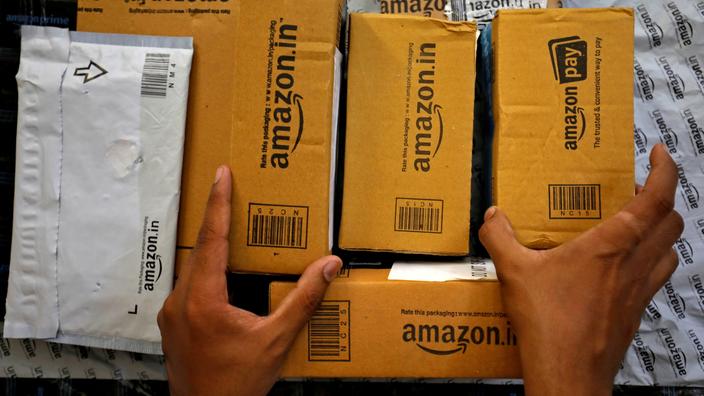 By the end of the year, the e-commerce giant will replace its plastic shipping packaging with paper or cardboard.

Online retail giant Amazon will replace its plastic shipping packaging with paper or cardboard by the end of the year in France, he said in a statement Monday. Plastic sleeves, used to ship small products (books, cards, microchips, etc.), will be eliminated in favor of paper bags or cardboard envelopes. “More easily recyclable”.

Inside the packages, bubble wrap or plastic cushions will continue to be used, contrary to what Amazon had initially told AFP. The company also uses kraft paper to wedge the items. “We will continue to innovate and find solutions to use even more sustainable materials“Said David Lewkowitz, director of operations at Amazon France Logistique, quoted in the press release.

Decrease in packaging weight since 2015

Amazon “also increases the number of products that can be shipped in their original packaging“, Said the company, without specifying how many will be affected. These measures apply only to products shipped by Amazon, and not those sent directly to consumers by third-party sellers on the site. The group does not communicate on its business volume in France, but the Kantar firm estimated the number of items purchased in France on Amazon at 333 million in 2019. In total, Amazon claims to have already reduced the weight of its packaging since 2015, and “eliminated over a million tonnes of packaging material“.

In France, 14 e-merchants, including CDiscount, Fnac Darty or Veepee, and the federation of e-commerce and distance selling (Fevad) signed a charter in July with the Ministry of Ecological Transition and the secretariat of State in Digital, in which they commit themselves in particular to reducing the volumes of packaging and promoting reuse. Amazon, for its part, has not signed this charter of commitments.

SEE ALSO – “Motivated”, hundreds of people protest against the establishment of an Amazon warehouse in the Gard