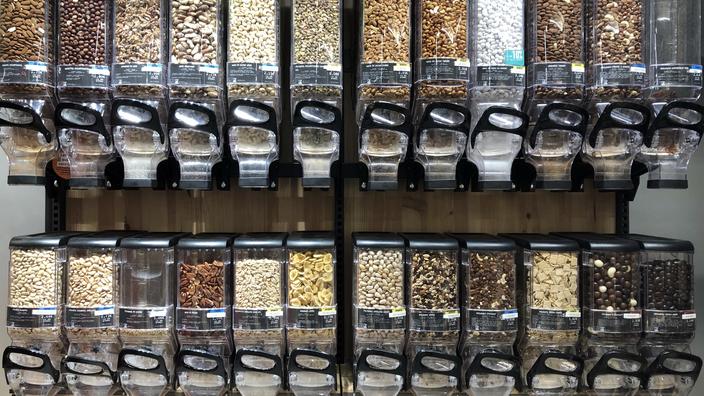 They have multiplied in recent years, but are now bearing the brunt of the new consumption habits of the French.

For several years, shops specializing in the sale of bulk products have sprouted like mushrooms… France now has 920 of them, whereas it had only about fifteen in 2015, according to figures from Réseau Vrac , association of bulk professionals. But they are strongly affected by the new consumption habits adopted by the French since the start of the health crisis. According to a study carried out over the period from May to November 2021, Réseau Vrac reveals that 81% of businesses specializing* in bulk sales have observed a drop in turnover of 20% compared to the same period in 2020. , linked to a drop in attendance of around 30%.

Read alsoBrands are getting loose… gropingly

An observation shared by Nosika, manager of the Maison Vrac grocery store, in Montfort-sur-Meu in Ille-et-Vilaine. “ Since September 2021, I have noticed a drop in my turnover of around 25%. The average consumer basket has not changed much but I am facing a 19% drop in attendance », Regrets this 37-year-old entrepreneur who opened this business in November 2020.

There are several reasons for this phenomenon. “ The health crisis has changed the consumption habits of the French. They rely heavily on drive-thru, home delivery of meals and groceries, and no longer want to spend as much time doing their shopping as before. Bulk grocery stores suffer from French disinterest in physical commerce “, highlights Célia Rennesson, co-founder and general manager of Réseau Vrac. It is true that according to Procos, a federation which represents approximately 60,000 points of sale, “the major shopping centers, the main shopping streets of large cities or even train stations are facing traffic drops of 20% to 30% compared to 2019.While the home meal delivery market is growing by 47% between 2018 and 2020, according to the expert firm Food Service Vision.

A market worth 1.3 billion euros

Cécile, a 46-year-old Parisian, followed this movement. “Before, I did my grocery shopping in the supermarket, which I supplemented with purchases from bulk grocery stores. But since I discovered the drive, I do more than that. Already, it’s much more practical and faster and I also prefer to avoid going to stores because of the circulation of the coronavirus. As soon as the health situation really improves, I think I will go back. explains this freelance in communication.

Read alsoE-commerce, local and homemade products: what future for consumption habits boosted by the Covid?

In addition, the purchase of products in bulk can also increasingly be done in supermarkets. The overall sales of bulk amounted to 1.3 billion euros in 2021, stagnating compared to 2020, and supermarkets represented 59% of sales, compared to 50% in 2020. Large-scale retailers want to offer more and more this type of product to their customers. At the national level, Monoprix, for example, offers more than 370 bulk product references in 2021 (vs. more than 300 in 2020). A proposal that conquers consumers. “Bulk consumers» are not necessarily attached to the point of sale. If they can buy this in the supermarket, they do so because it is more convenient and can be a time saver.“, explains Florence de Ferran, teacher-researcher in responsible consumption.

Another reason is the price. As France faces persistent inflation, consumers are paying more attention to their spending. “I use the drive because it saves me from going to stores and systematically buying extra things and supermarkets are offering a lot of promotions at the moment. Plus, I have to drive 30 minutes to get to my grocery store. With the rise in the price of gasoline, it is no longer possible, it is too expensive, ”regrets this young 27-year-old mother who lives in Charente-Maritime.

But Célia Rennesson of Réseau Vrac is sounding the alarm for the survival of this young sector. “We are encountering the same traffic problems as all physical businesses, but the problem is that bulk grocery stores are very young and do not have the cash flow to deal with a lasting crisis”, she claims. In 2021, around thirty specialized stores closed their doors, compared to around ten in previous years. Marylou, who offers a mobile bulk grocery store around Dax, is indeed worried about the survival of her business. “The course will be difficult to hold, the cash is melting very quickly. I have lost 20% of my turnover since January,” she says when she started her business only six months ago.

The General Manager Réseau Vrac calls on customers to come back to the store. “Consumers need to pull themselves together, if they don’t go back to the store now, when they want to go, they won’t exist anymore.” But she wants to remain optimistic and is still counting on the fact that the end of the health crisis will help the French to turn again to physical commerce: “ From spring, there will be a rebalancing that will take place between the digital and the physical and it is also once again to make them want to come back.»

The legislative framework will also encourage consumption by bulk since article 11 of the Climate and Resilience law requires that at least 20% of the shelves of supermarkets be converted to bulk by 2030. “This development will benefit the entire sector because it will make the French more aware of the purchase of products in bulk.“, she puts forward. It remains to be seen how many specialty stores will have survived this crisis.