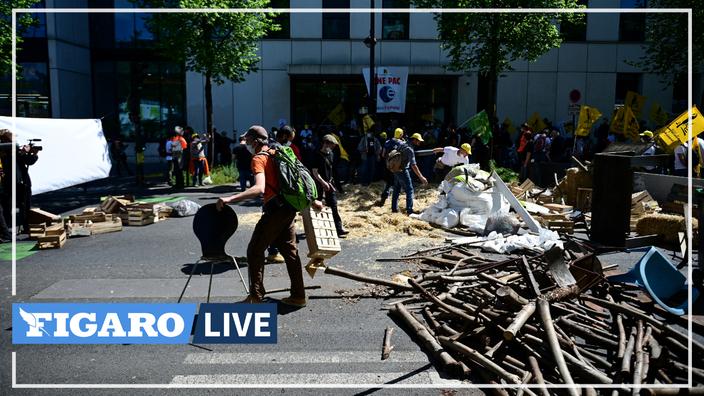 The activists were gathered to demand “a meeting with Emmanuel Macron” and obtain a common agricultural policy (CAP) more oriented towards employment.

About 200 peasants from all over France demonstrated Thursday for more than five hours in and in front of the Pôle Emploi headquarters in Paris to demand from the executive a CAP that preserves agricultural employment, before being evacuated by the police, including one limb was injured.

Read also :PAC: the government wants to give priority to vegetable proteins and organic

The demonstration was completely dispersed around 7 pm by the police, in some confusion after several charges on the demonstrators to evacuate the site. The police headquarters reported on Twitter that a police officer had been “Wounded by a projectile throw and hospitalized”. 120 protesters were fined, she said.

Nicolas Girod, spokesperson for the Confédération paysanne, denounced to AFP a “Pressure on trade unions” : “We want to piss off people who want to demonstrate, who want to assert strongly but in a non-violent way” their demands.

About thirty activists invaded the entrance hall at the end of the morning to demand an interview with the general management of Pôle Emploi, in order to “negotiate a meeting with Emmanuel Macron», Explained to AFP Véronique Marchesseau, general secretary of the Confédération paysanne. In front of the building, a little more than 150 demonstrators, men and women, blocked the street, with a force of straw bales and wooden crates, organizing a barbecue in a friendly atmosphere, a stone’s throw from the ring road. Their goal: to obtain from the Head of State a European Common Agricultural Policy (CAP) more oriented towards employment, a little less than a week after the presentation by the Minister of Agriculture Julien Denormandie of the way in which the EU aid envelope will be distributed by France for the period 2023-2027. Arbitrations deemed too little green and not sufficiently favorable to small farms by the organizations united in the collective Pour une autre PAC, including the Confédération paysanne.

The demonstration took place calmly, before the police condemned the outcome of Pôle Emploi by forming a cordon, pushing back demonstrators, including the deputy of Ariège Bénédicte Taurine (LFI) who fell to the ground in the stampede. “We have an appointment proposed by Paul Delduc, agricultural advisor to the Élysée. We wanted a meeting with Macron of course, but we’re going to go ”, explained Nicolas Girod, who sees “A walk to go see Macron later”. He had denounced before “Trade-offs over stability which will mean that we will continue to lose 10,000 to 15,000 peasants per year”. “They will meet here“, He lamented, pointing to the Pôle Emploi headquarters, in front of which empty boots had been symbolically placed.

“We, the agriculture we offer, it provides jobs”, said Véronique Marchesseau, who wants, among other things, a “Aid capping” to large farmers in order to have “Redistribution for as many people as possible” and a significant revaluation of the payment on the first hectares intended to support small and medium-sized farms. Because today “The more hectares we have, the more we touch”, deplored Robert Grosjean, 85 years old, formerly installed in the Marne, came by motivation “Citizen”.

Pensioners among the demonstrators

Because if among the demonstrators were many farmers in exercise, retirees had also made the trip. “I came for my children, who are young people who have settled in, who will not see much of this CAP”, thus declared to AFP Marick Meunier, former farmer of the Rhône. “We are very angry, there is such an urgent need to change things that this status quo is unbearable”, denounced Laurence Marandola, head of the CAP at the Confédération paysanne. According to her, the current distribution of CAP aid “Did not allow farmers to make any income. It’s a social plan, we have lost 15,000 farmers per year since 1988. ” “As long as there is still the possibility of changing things, we will put pressure. Our troops are determined ”, assured Véronique Marchesseau.