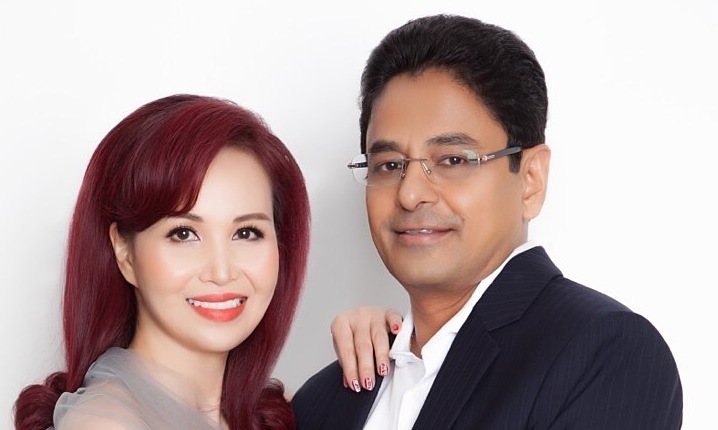 Every anniversary, Indian husband – Maneesh Dane – prepares dinner in the garden with roses and scented candles for Dieu Hoa.

Miss celebrated her 28th wedding anniversary last December. Because of the epidemic, the family held a small party at home. The beauty remembers the anniversary when she received the marriage certificate in 1993 in Hanoi. As the first Vietnamese-Indian couple to come together, officials from the Hanoi Department of Justice held a small engagement ceremony to celebrate, with the presence of the Indian Ambassador.

After that, they held a wedding ceremony in both their mother and father’s hometown. The party in Vietnam takes place according to modern etiquette, the bride wears a gorgeous wedding dress, her tail is two meters long, and two little angels help lift her skirt. Dieu Hoa’s husband also offered incense to the ancestors’ altar and carried the bride according to traditional rituals. When she went to India, she wore a sari and held a wedding according to the custom in her husband’s hometown.

“Looking back on the past 28 years, I am touched by the couple’s overcoming all difficulties to achieve success. I think the greatest source of strength is the love for each other, for the children, the desire to build build a happy family,” Dieu Hoa said.

Dieu Hoa and her husband’s relationship originates from the Miss Vietnam contest. In 1992, she attended the final night as a guest, preparing to crown the new beauty queen. Listening to the exchange, businessman Maneesh Dane, then the audience, was impressed by the beauty and intelligence of the beautiful woman, thanks to common friends to connect and get acquainted.

Not a giant, Maneesh Dane conquered the beauty queen thanks to her elegant personality, intelligence, good study, and wide understanding. When he was young, Maneesh Dane scored well in exams, got a special jump in class and should graduate from high school at the age of 14, get a university degree at 16, complete a master’s degree at 18, and then get a company Thailand recruited as chief representative in Vietnam.

When they first fell in love, the two were inseparable. Once, Dieu Hoa went to France for about three months to visit her parents who were working there. In Hanoi, Maneesh Dane found many ways to contact his lover. Dane writes a handwritten letter every day and then sends out a seven-card pack at the end of the week. The boyfriend also scheduled a time to call through the desk phone at Dieu Hoa’s father’s office.

Because of Maneesh Dane’s career, the couple once went to Thailand to work. Later, when two daughters and a son were born, the two decided to return to Ho Chi Minh City to open their own company, start a business together, and settle down.

Work is busy, but Dieu Hoa and her husband always maintain a romantic atmosphere in the family. Before the epidemic, they often went on picnics and went to the beach to relax on weekends. Currently, the couple is at home having dinner, drinking coffee in the garden, and singing karaoke together. Every Valentine’s Day, wife’s birthday or wedding anniversary, Maneesh Dane often prepares dinner, decorates with scented candles and roses. Occasionally, the businessman still gives his wife handwritten cards.

28 years together, although it is impossible to avoid disagreements in work and life, the beauty queen has never raised her voice. When there is a problem, they calmly analyze together to find a solution. Dieu Hoa said: “I think true love should be built on the basis of respecting and caring for the other half. And marriage is not just a dream. The more you love each other, the more you two want to try to build a nest. warm happiness, a lasting love”.

Living in a family with two cultures, the couple is always humble and actively learns about the other half’s homeland traditions to reconcile. Their children talked to their parents in English, Indian and Vietnamese, and were told many stories about the two cultures.

Every year, Dieu Hoa takes advantage of bringing the whole family back to her hometown to play once or twice. The two eldest daughters know both traditional Vietnamese dances and Indian belly dance. She focuses on teaching her children to be independent and follow their dreams. Currently, the two beauty queen’s daughters are university graduates and have jobs in the US. The youngest son is in his third year in Washington, majoring in computer science.